The 2014 graduating class of SLPs nominated Samuel Greene to be their keynote speaker at the May commencement ceremony. Twenty-eight graduates and their friends and family, plus our faculty—250 people in all—were treated to a speech that highlighted Sam’s extraordinary accomplishments, as well as the profession to which our graduates have dedicated themselves. 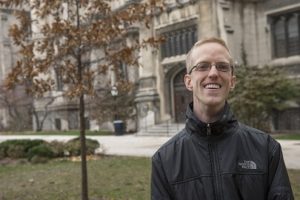 A native of Spring Green, WI, Sam recently earned a BSc in Chemistry from the University of Chicago and wrote an MS thesis on methane emissions from lakes in Alaska (a major contributor to climate change), earning an MSc in Physical Chemistry. Late last year, Sam competed for a Rhodes Scholarship to continue his studies in Physical Chemistry at the University of Oxford, UK, and won one of the 32 spots awarded to American students. Sam is vitally interested in creating renewable energy technologies, and the Rhodes scholarship, Sam’s path to a doctoral degree in Physical Chemistry, positions him to make a major contribution to the well-being of humanity. This remarkable accomplishment is even more noteworthy in light of Sam’s early history. Sam was born with cerebral palsy, which affected his general and speech motor capabilities. His speech motor capabilities were affected in such a way that he might be evaluated by an SLP as having a moderate-to-severe problem with speech intelligibility. In his graduation address, Sam described working with our then-Clinical Professor Joan Kwiatkowski (now Clinical Professor Emeritus) and her students on learning to control his speaking rate, pausing, and speech breathing to increase his intelligibility. The proof of his therapy’s success was in the demonstration of his ability to modify the act of speaking during his address, and adjust his intelligibility. He acknowledged the value of his own hard work, as well as the value of working with professionals who understand communication challenges and know how to make them less challenging.

People outside our profession sometimes pose the reasonable question, “Do speech-language pathologists offer a service that is truly of value?” As professionals, we can direct people who ask this question to relevant studies in the scientific literature that allow us to respond, “Yes.” And, we can ask people like Sam Greene to provide the kind of real-life evidence of why carefully-trained SLPs make a difference in the lives of people with communication challenges.

We wish Sam all the best at Oxford!