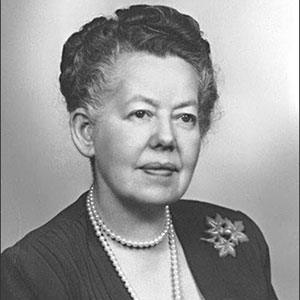 Dr. Sara Stinchfield (later Stinchfield Hawk) earned the Master’s degree from the University of Iowa in 1920 and the Ph.D. degree in Speech (emphasis in speech correction) from the University of Wisconsin in 1922. This was the first Ph.D. in Speech in the United States, the product of a new doctoral program at the University led by Smiley Blanton, M.D. Her dissertation, advised by Dr. Blanton, was entitled “Formulation and Standardization of a Series of Graded Speech Tests.” After receiving her doctoral degree, Dr. Stinchfield Hawk became an Associate Professor of Psychology at Mount Holyoke College in Massachusetts where she taught from 1922-1932. In 1932, she moved to Los Angeles to become a lecturer at the University of Southern California until 1944. She also served as Director of the Speech Clinic at the Orthopedic Hospital of Los Angeles.

She was instrumental in defining terminology and clarifying distinctions among normal and delayed or defective speech performance. Her scholarly publications focused on the assessment and etiologies of disordered speech in children and adults, adding an emphasis on moto-kinesthetic therapies. Her early training in “elecution” (the skill of clear, expressive speech) was reflected in later interests in the relations among speech, musical ability, personality, intelligence, and scholastic achievement.

Dr. Stinchfield Hawk was one of 25 founders of the American Academy of Speech Correction in 1925. This group persisted and grew, changing its name four times to now be known as the American Speech, Language, Hearing Association (ASHA). She served this organization as Secretary (1925-1930), chair of the membership committee (1932+), member of the nomenclature committee (1939-1940), and as its first female President (1939-1940). She became a Fellow in 1925, and in 1953 received the Honors of the Association.