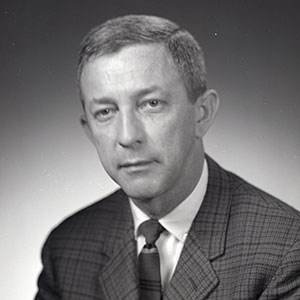 Dr. Claude S. Hayes’ early academic work was interrupted by World War II, during which he served three years in Eisenhower’s headquarters command. Following military service, he completed an undergraduate degree at Eastern Illinois University, then attended Northwestern University where he earned a Master of Arts degree (1949) and a Ph.D. (1951).

His early career included three years at Walter Reed Army Hospital, followed by two years as Director of Education for the Junior League School for Speech Correction in Atlanta, with an appointment as Associate Professor at Emory University.

Dr. Hayes was hired in 1958 as Assistant Professor by Dr. Gladys Borchers, then Chair of the University of Wisconsin Department of Speech. With that appointment, he became the first full-time audiologist in the nation’s first college-based speech and hearing clinic. He was promoted to Professor in 1963 and in 1966 was named Director of the University of Wisconsin Speech and Hearing Clinic. In 1967, Dean Leon Epstein appointed Dr. Hayes inaugural chair of the new Department of Communicative Disorders.

His 12-year term as Chairman coincided with rapid growth in enrollment, faculty, and clinical staff, as well as external support for research and student training. It also occurred during a time of crisis at the University. In 1968, amidst demonstrations, police and military presence on campus, and the bombing of Sterling Hall, Claude’s response to student angst was characteristically constructive. He helped students in the Department organize ways to assist other members of the campus community convey their thoughts and feelings (of whatever persuasion) to elected officials. During that time, Claude’s inherent calmness, tolerance, candor, and boundless good spirits proved invaluable.

Dr. Hayes’ professional interests centered on auditory assessment and habilitation / rehabilitation of hearing loss, with an emphasis on children. He advised and consulted with local, state, and federal agencies, and universities. He was active in crafting evolving standards for national accreditation of professional training programs and clinical certification of practitioners.

Following his term as department chair, Claude renewed his commitment (one shared with his wife, Dorothy Morgan Hayes) to children with hearing loss. Throughout his career, Claude’s curriculum vitae included Dorothy’s credentials as an educator of the deaf and audiologist.

Dr. Hayes was elected President of the American Academy of Rehabilitative Audiology (1973-4) and received the Honors of that organization. In 1965 he was elected Fellow of American Speech-Language Hearing Association. The Wisconsin Chapter of the National Hearing Aid Society granted him its first Distinguished Service Award in 1983, the year he retired as Emeritus Professor. The year prior, Department Chair Dr. Dee Vetter’s annual review of his performance named him a “departmental treasure.”

Claude is remembered by his colleagues as a gifted administrator, a dedicated clinician, a demanding but encouraging teacher, and a mentor to generations of students. Former students recall with gratitude the many times “Claudio” and Dorothy welcomed them to their home in Madison. Those informal meetings with faculty, clinical instructors, and graduate students produced as much personal and professional insight as what happened in classrooms and clinics.